ASSISI – An extraordinary collection of photos that reveal the Franciscan presence in the Holy Land, revealed to the public for the first time! This unpublished collection is composed of 150 images, included in three albums by the photographic studio Fiorillo, dated from 1885 to 1887, which have been held by the Minor Friars Provincial Archive of Aracoeli in Rome. It is dedicated to the sites in the Holy Land protected by the Franciscans.

This exhibition, set up in Assisi and curated by Marco Pizzo, Vice-Director of The Central Museum of the Risorgimento in Rome, is set up in the first floor rooms of the Palazzo Bonacquisiti, in the Piazza del Comune. Here viewers can enjoy images from the three albums: Judea, Galilee, and Egypt. The collection reveals the activities carried out by believers in the holy places, forming an ideal bridge between the contemporary world and the evangelical tradition. These places are depicted with an accurate documentary interest, and the scenes are “alive” with people—Franciscan Friars and natives—who seem to accompany the visitor or the viewer of the photographs. Many of the scenes feature educational and productive activities, while the group photos have a well-established figurative structure, depicting a cohesive group of people who share common expectations and—in this case—the same spiritual path. All of these images, in their detail and in their conceptual layout, trace a path through these sacred places, and they offer a precise formal intent: Look. It happened right here. This is the place.

The expression “Holy Land Custody” describes a vast territory, forming a province of the Franciscan Order of Friars Minor that includes properties in Israeli-Palestine, Egypt, Syria, Jordan, Lebanon, Cyprus, and Rhodes. The history of this province has its roots in ancient times: its birth can be traced to 1217 when the First Friars Minor General Chapter (the so-called Chapter of the Wickers held in Assisi) called for a vast evangelism effort that would reach out to all of the people in the then-known world.

Over the centuries, the Order carried out activities in the Holy Land that were not limited to the preservation of the Sacred Places. They also promoted intense educational, formative, and working activities, oriented towards the Palestine Christians, who were much more numerous than today. At the end of the XIX Century, there were 450 members divided into 15 convents which annually hosted 12,000 pilgrims and sustained 16,000 destitute persons—thanks to the work of 20 doctors, 10 free pharmacies, and 100 schools. 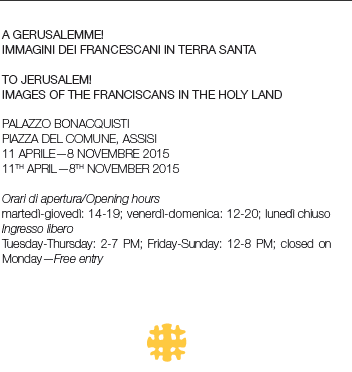